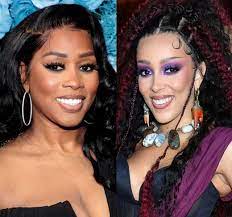 (GEMS RADIO)–Remy Ma has sparked an online war after she refused to refer to Doja Cat as a rapper. The Terror Squad member was speaking in an interview with Drink Champs N.O.R.E and DJ EFN.

The comment by Remy caused a tirade on Twitter with tweeps taking both sides of the divide. Some were outwardly surprised by the female rapper’s remarks while others agreed with the sentiments.

“Y’all have to understand where Remy Ma is coming from. She grew up in a time where artists were rapping, not singing. Doja Cat’s music is more pop than rap, and that’s a fact.” Said one tweep

“Is Doja Cat a rapper?” one person wrote. “mmm nah wouldn’t necessarily say that however she does rap alot of verses over pop beats. Sooo gotta agree with Remy Ma. She def dope af tho,” said another

One angry Doja Cat fan tweeted, “Remy Ma saying Doja Cat isnt a rapper just pissed me off. Bitch are YOU a rapper? What was the last song YOU released?”

Agreed Not To Talk With Nicki Minaj

When asked by show hosts about her beef with Nicki Minaj, the New York rapper spoke candidly on how it initially caught her off guard.

“We had conversations, regular conversations,” Remy continued. “I never saw that one coming, because I felt like we had a conversation with her, because I’ve been in this predicament before, where I was the girl just coming in…” (GEMS RADIO)--Nicki Minaj and Fivio Foreign dropped "We Go Up" this week. Rappers Nicki Minaj and Fivio Foreign have joined forces on a new single this week that probably won't make the cut on any album. "It's just a surprise for the fans,” she wrote on Instagram. No video, no promotion , and it made it to number one on iTunes. Minaj raps: “I could be all the way covered and still […]