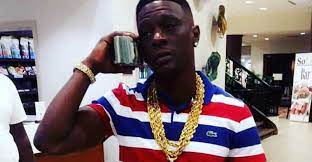 It is a never-ending drama with Boosie Badazz after his brother threw shade on him over his ineptitude in supporting artists.

In a social media feud, Boosie’s braggadocio on how he would have taken Yung Bleu and his Brother TQ had then not cut him off from business dealings has been met with dissension. To make it worse, Boosie at first had heaped blame on DJ Vlad accusing him of reneging on supporting Bleu. In a later interview with Vlad, he changed tune and went on to fault his brother TQ for cutting the rapper out of a deal.

It is Your Fault, TQ Tells Boosie

However, TQ took a swipe at his brother on Instagram saying that Boosie was wrong. He further went ahead to list 20 artists including Boosie’s son, Tootie Raww, and Dee Rogers whose careers have come to a screeching halt over Boosie’s lack of support. TQ further warned his followers that the list is long, and he could not remember all of them.

From the two sides, it is not clear who is at fault. Boosie says that Yung Bleu and other artists were not signed to him while TQ and Bleu say otherwise. However, the guilty party will be unearthed as the war of words continue. We all know that Boosie will not take TQ’s accusations lying down.

He is Not a Stranger to Controversy

Although Boosie Badazz is an icon and celebrated by his millions of fans, he has also rubbed shoulders with a lot of people and is deemed controversial by a lot of people.

One of his vilest statements was the dissing of Lil Nas X in a series of homophobic tirades where he went as far as suggesting that the musician should kill himself. He further condemned the sentencing of R Kelly as harsh in a series of tweets that was construed as condoning sexual offenses with minors by some critics. While announcing the relaunch of his OVO brainchild to his 116 million Instagram followers, Drake announced that the OVO Fest will run for 3 days. OVO is an acronym for October’s Very Own Drake’s label and clothing line. After a two-year hiatus following the covid 19 devastation, the October World Weekend is finally kicking off. The OVO Fest Features Leading Artists On day one which will be on July 28, […]