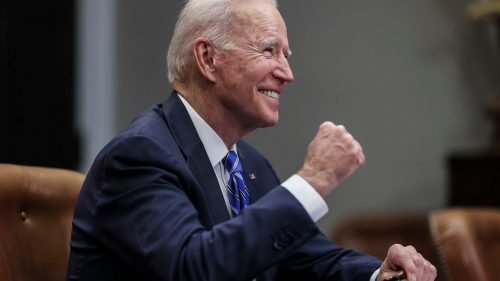 An unusual rap song is sitting at the top of iTunes hip hop charts at the moment. “Let’s go Brandon” is an anti-president Joe Biden rap song performed by Loza Alexander.

Everything about this song is unusual. To begin with, the song took a unique route to the top of the charts.
It went viral on TikTok before catching up on the iTunes hip-hop chart to clinch the top position. The crazy thing about the song is, it started as a chant in the most unusual way you could think of.

Kelli Stavast, an NBC sports journalist, interviewed a NASCAR driver, Brandon Brown, after his victory at the Alabama Talladega Superspeedway. This was earlier in the month. The crowds could be heard chanting expletives and mentioning President Biden.

“F**k Joe Biden,” they said. But that’s not what the NBC reporter heard.

“Brandon, you also told me — as you can hear the chants from the crowd, ‘Let’s go, Brandon’ — Brandon, you told me you were gonna kinda hang back those first two stages and just watch and learn,” the reporter continued to interview Brown. “What did you learn that helped you in those closing laps?”

And that was the beginning of the social media frenzy, with some saying that the reporter was intentionally attempting to misrepresent what the crowd was chanting. Whatever the case, the phrase did find its way to the president’s most brutal critics.

The slogan has replaced the more vulgar “F**k Joe Biden” chant. But one thing you cannot deny is, no one saw this coming — an anti-Biden slogan, now number one on iTunes hip-hop charts. But then again, it’s 2021. Expect anything. Like fine wine, many tings take time and perfection. Pop star Dua Lipa will release her third album when she is satisfied with what she has. The singer is on a roll with her music. Last year's Future Nostalgia album proves that the singer has a lot left in her. She flew out her collaborators to London, Sarah Hudson and Clarence Coffee Jr., to help her on her next project. […]