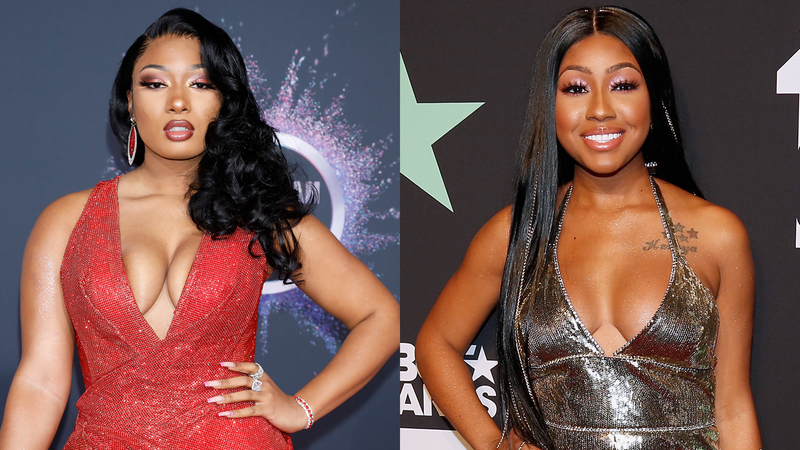 If you’ve listened to Megan Thee Stallion’s debut album Good News, you already know about her collab with Yung Miami, “Do It on the Tip.” Also, if you follow the two rappers on social media, you can tell that there could be another kind of collab, one that involves dating each other.

Megan says She is Attracted to a Girl

On Wednesday, Yung Miami posted a clip of the upcoming episode of the Caresha Please podcast, which showed Megan Thee Stallion shooting her shot. In the preview, Miami asks Meg if she likes girls, and she says, “I like what I like. I like you.”  The City Girls star then smiles and asks, “You do? You would fuck me?” Megan said that she would, and the two rappers burst into laughter.

The host, Caresha, asked who would be on top if the pair were to have sex and wasting no time, Megan said she would take control.

In another clip, things got saucy, where Yung said she’s a classy lady and would want to go out for dinner with the Hot Girl Meg and later get intimate.

Meg is dating Pardison Fontaine, while Yung Miami is with P. Diddy. Diddy opened up about their relationship in June.

Not the First Time

This was not the first time Meg and Miami discussed their relationship publicly. Last month, the Act Up singer posted a video of her and Meg getting cozy during a night out. Thee Stallion joked that Miami was her girlfriend and that she was “upset” that they (Yung and Diddy) went public with their relationship.

When she heard about the alleged relationship, Meg playfully asked, “You got a man?!” Yung Miami then went along with the vibe and caressed Meg’s face.

Yung posted the July video with the caption, “My girlfriend love you @theestallion [love emoji].”

The new Caresha Please episode with Megan Thee Stallion is expected to premiere on Thursday, the 25th of August, at 8:00 P.M. Eastern Time on REVOLT’s YouTube channel. (GEMS RADIO)---Meek Mill left Roc Nation back in July, but it's not only til now that JAY-Z has responded. JAY let the beans spill on DJ Khaled's new track "God Did". “Me and Meek could never beef, I freed that n-gga from a whole bid, Hov did,” he raps on the song. “Next time we have a discussion who the G.O.A.T., you donkeys know this.” Hov wrote an op-ed for […]