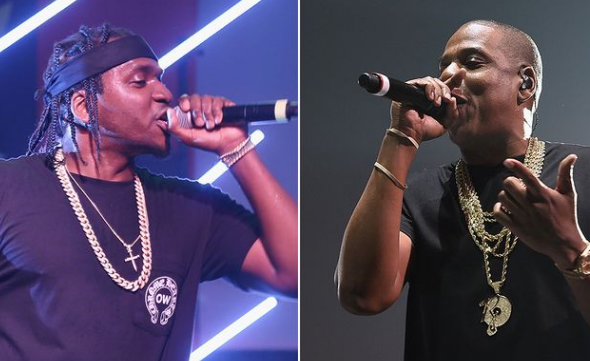 (GEMS RADIO)–Pusha T has confirmed rumors of a collaboration with Jay Z on his upcoming album. The rapper was speaking at an interview on Gillie Da Kid and Wallo’s Million Dollaz Worth of Game podcast when he seemingly confirmed the feature.

When asked what songs he had with Hov, the rapper slipped and let it out that he is working on something with the now filmmaker, a song that will be present in Pusha’s new album

“I got three songs with him now … something from my new album,” he revealed. “I don’t know if I was supposed to say that, but I’m up with y’all, though, we here.”

Best Verse between Hov and Pusha

It won’t be his first with Hov. Pusha has worked with Jay twice now, initially on Kanye West’s “So appalled” and on “Drug Dealers Anonymous.”

The rapper believes that he tied with Jay when it comes to the best verse between Jay-Z’s “So Appaled” and himself on “Drug Dealers Anonymous.” He, however, admits that Hov edged him on his upcoming project.

“Oh, he got busy,” he said with a grin. “I send him shit ’cause I know he gonna say shit that I just can’t say. To me, that’s what be wild impressive.”

Kanye and Neptune Working Behind The Boards

Pusha recently released “Diet Coke,” where he features Kanye in the video. It was confirmed that Ye and Neptune are working full-time on Pusha’s new album. The release date is still unknown.

Pusha T is quoted saying, “The album of the muthaf**king year is coming,”

In an exchange with Carl Cherry, head of Urban Music at Spotify, the rapper disclosed that the album would be different from others he has made.

“Welp this album is abt feeding the conscious mind, I hope you aren’t disappointed,” Tweeted the rapper, adding “I’m growing up Carl.”

The rapper is approaching the end of his contract with Def Jam and could enter free agency after releasing the album.